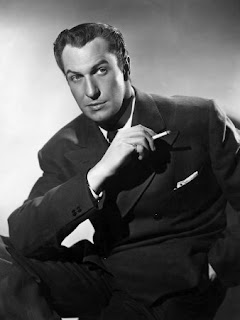 Vincent Price 1940s
Vincent Price is most famous for being an actor, particularly of sinister characters which he so often portrayed in his later acting career, but Price was nearly as well known as a connoisseur of art. Price always had a fascination with art. As a twelve-year-old in St. Louis, Price purchased his first Rembrandt, a small etching entitled Two Nude Models, One Standing. The piece of art captivated Price so much that he saved his allowance for a year and worked odd jobs to purchase the etching. This was the beginning of Price's long association of art.
Price would go on to study art at Yale and then later at the University of London. He continued to study art by visiting museums and collecting. By the 1960s, Price had become so synonymous with art that the Sears department store approached him to be a spokesperson for a new art department they were creating. In the position, Price travelled the world buying and selecting quality pieces of art that Sears would then sell in their stores to their customers. The line of art would be known as the Vincent Price Collection for Sears. Price was essentially bringing fine art to the masses.
A couple decades earlier, in the 1940s, Price, along with friend and fellow actor George Macready, opened an art gallery in Beverly Hills. Both Price and Macready had been stage actors in New York, where there were many museums and great collections of art, but when the two came to Hollywood, they quickly realized Los Angeles lacked a strong art community. Despite all the affluent people and the large size of Los Angeles, there wasn't that many great collections of art, galleries, or even a community supportive of fine art. Price and Macready sought to change that. 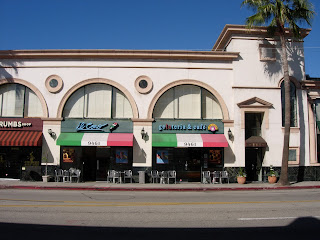 The Little Gallery
9461 Santa Monica Blvd, Beverly Hills
In 1943, the two actors opened "The Little Gallery," located at 9461 Santa Monica Boulevard, in Beverly Hills, near the famous Rodeo Drive. I found the address for the gallery by looking in a Beverly Hills City Directory from 1943.  Above is a photo of the Little Gallery location. I'm not sure if this is the original building that housed the gallery, only remodeled, or if the building was torn down and a new structure erected in its place? If you know the answer to that please comment.
According to Vincent Price: A Daughter's Biography, by Victoria Price, the rent for the small shop was $65 a month. The gallery was filled mainly with paintings and drawings that Price and Macready had purchased from their days in New York, pieces from their own collection, and works by California artists.
Victoria Price wrote the following about the opening night of the gallery in her book: "They launched the opening show with vodka martinis dripped out of a silver-plated porcelain-lined urn that Vincent's mother had given him for serving iced tea. As he recalled, 'Most of our friends liked martinis, especially free ones, and we drew an overflow crowd who hadn't the slightest intention of buying anything. A few idle pricing passes were made, but no purchases; but the main joy was that we were launched and art was back in our lives."
The Little Gallery was a success. California artists and visiting artists were always coming in, as well as a crowd from a nearby bar. Even big celebrities of the time would come in to buy art, including Charles Laughton, Otto Preminger, Greta Garbo, and Katherine Hepburn to name a few. Unfortunately, Price and Mcready did not have the time for both their movie careers and for running a gallery, so the store closed in 1944, after about two years in operation.
Your thoughts?
Posted by Robby Cress at 4:13 PM

Wish I could have seen it in it's prime. How fantastic would it be to sip a martini with Garbo?

My grandfather is George Macready. Although throughout my childhood the gallery was mentioned but I never knew the history behind it!
It was great reading about it. Thank you for posting!

George Macready is my grandfather. Though out my childhood there was mention of the gallery but I never knew the history behind it. Thank you for sharing!

So glad you were able to find your way to my blog. Thanks for your comment. I'm sure your grandfather had many fascinating stories to share! If you ever want to share some of those stories drop me a line at DearOldHollywood@gmail.com.

Jane Wyatt said how it was a fun place.Thought both men terrific actors.Bet Mr Macready was a tried and true friend,Mr Price seemed to think the world of him.Also have many G.Macready dvds I've discovered online and many tv shows,love his work,even more now than Mr Price's work.My best to his family-your grandfather was truly neglected at Oscar time on several occasions.