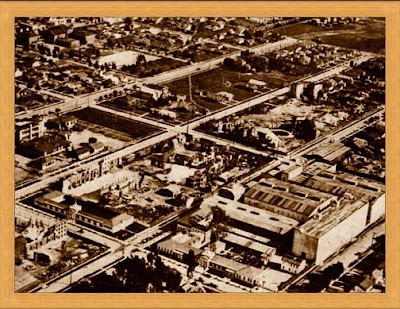 Metro / Buster Keaton Studios, Hollywood, CA
Of the top three silent comedians this is what comes to mind: when I think of Chaplin I think "finesse." When I think of Lloyd I think "Sporty." When I think of Buster Keaton I think "daring." Keaton devised some of the most elaborate and dangerous stunts of any of the silent film actors. Not only did he do all of his own stunts he often played the role of stunt double for his fellow supporting actors. Many times Keaton would injure himself but that rarely kept him from continuing his work and I believe this, along with his well developed gags, made him one of the greatest.
Many of Keaton's most memorable films including Steamboat Bill, Our Hospitality, and The General to name a few, were made at the Buster Keaton Studio in Hollywood, CA. The main entrance to the studio was located at 1325 Eleanor Ave but the structures of this studio are long gone. In the vintage photo at the top you can see part of the Keaton Studios which eventually became the Metro studios. In the two photos below you can see the studio site as it appears today.
Note* There used to be a Buster Keaton statue that stood at this location but it has been removed. If you go to where the Eleanor street sign is and look at the ground you can see a plaque where the statue used to stand. I need to go back with a towel and clean it off though in order for a photo of it to show up. 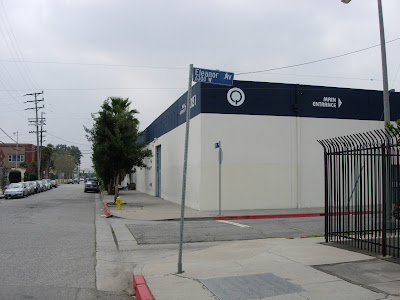 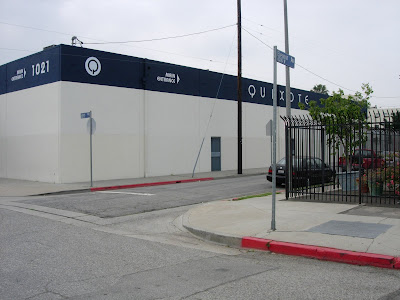 Buster Keaton always keeps me in awe. His stunts are so amazing and so hilarious!

Thanks for this post. Why did they ever remove the Buster Keaton statue?!

You know, I'm not sure why they removed the statue. One possibility is because this part of town isn't the nicest part of town and perhaps there was concern about vandalism. That's just a guess.

If anyone knows where and why they moved the statue please share :)

Wonderful Keaton montage! He was lovely.

good work! you know how much i love by buster! :)glad to see that you finally wrote a post on him!

not only did he do stunts for his fellow actors- he also wrote for them!

Awesome stuff, Rob. I always like to hear the history of the old studios and see where they once were. You need to write that book, or start a tour series. Keep up the good work.

you know, i'm sure, that keaton's movies are playing every wednesday night this month at the silent movie theatre! your post has just made up my mind to go and catch tomorrow night's line up!! Yay! :D

I wonder about the removal too. Valentino's statues are in DeLongpre park (or apparently were as of not too long ago) which is pretty ghetto and scary. It's very odd that its been removed...I wonder who could be contacted about it :S