Steve McQueen Coming Back to the Big Screen in Pairs 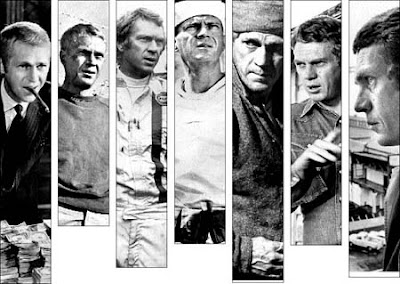 Why does it seem that so many movie projects come in pairs? Armageddon vs. Deep Impact, Capote vs. Infamous, recently Paul Blart: Mall Cop vs. Observe and Report and I could go on. Now there is two biographical pics in the works on the legendary actor, the "King of Cool," Steve McQueen!

Producer and former McQueen publicist David Foster is working on a film based on the memoir written by Neile McQueen Toffel, McQueens first wife, titled "My Husband, My Friend." The second project has Jesse Wigutow set to write a screenplay based on Marshall Terrill's biography "Steve McQueen: Portrait of an American Rebel." No stars have been named for the projects.

One question for you guys and girls:

Who do you think should play the role of Steve McQueen?
Posted by Robby Cress at 9:05 PM

Tough question! Ewan McGregor could probably pull it off. Or maybe not.
Toffel, funny name. Means "slipper" in Swedish. Or, as a slang word, a human door mat. Haha.
I guess the reason for the pair films is that the rumour of a great film idea spreads among the studios, and then it becomes a race of who will get the credit for the idea by completing the film first. Just a theory.

There is no one who can play Steve McQueen.