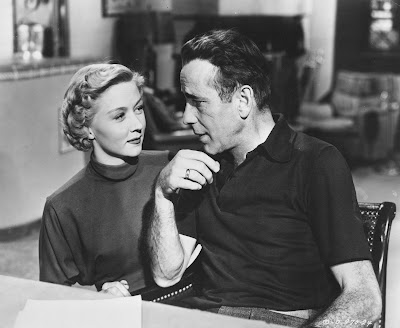 Tonight, as part of the Cinefamily's Hollywood Gothic Film series, the Silent Movie Theatre is showing the classic Humphrey Bogart film, "In a Lonely Place." This was Bogart's first film that he made with his production company after his contract with Warner Bros. expired. Bogart plays a cantankerous screenwriter who hates his work and the people he is working for. When a hatcheck girl he knows shows up murdered Bogart becomes the prime suspect. Like the film Sunset Boulevard, this is another beautifully dark film from the 1950s that focuses on a screenwriter.

Following In a Lonely Place the Silent Film Theatre will be showing the 1980s film Fade to Black. This story follows a fanboy, Dennis Christopher, who is working in a Hollywood prop house. Dennis knows everything about movies but nothing about interacting with people. He eventually snaps and becomes a serial killer who impersonates his favorite films when killing his victims.

Make sure to check out the Cinefamily website for other great classic films that are coming up.
Posted by Robby Cress at 8:25 AM