Laurel and Hardy - The Music Box 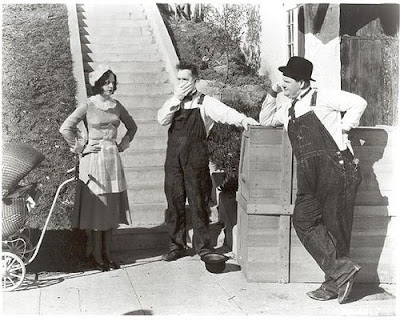 932-935 Vendome Street, Los Angeles
One of my favorite Laurel & Hardy comedy shorts is The Music Box, in which the boys are hired to deliver a piano to a house located at the top of a long flight of stairs. The boys struggle to push the piano up the stairs, becoming trampled by the piano in the process. Not until they reach the top do they realize there was a driveway that lead to the top! The film won an Academy Award for best short comedy subject at the 1931-1932 awards. 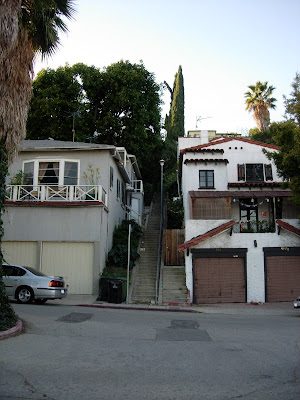 932-935 Vendome Street "Music Box" Stairs
The stairs that were used in The Music Box are still standing, located between 932-935 Vendome Street, just south of Sunset Boulevard in the Silver Lake neighborhood of Los Angeles. Above is a picture of how the stairs look today. Not only were the stairs used in The Music Box but they are featured in an earlier Laurel & Hardy film from 1927, Hats Off. In this film the boys were delivering vacuum cleaners. 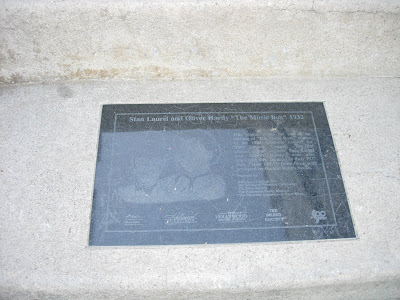 Plaque located at base of The Music Box stairs.
At the base of the stairs you will find a plaque ackowledging the significance of these steps. The Los Angeles Cultural Heritage Board has made this location a cultural landmark. Not only is their plague but there is now also a street sign for this particular location.
Here is a wonderful video that shows The Music Box stairs as they appear today and also, if you watch through to the end, you will see clips from the short itself. The video does a good job of showing the steps from different angles and comparing to footage from the film.
Posted by Robby Cress at 9:53 AM

cute! Must be wonderful to live in a home which has so much history.

Oooh!!! Thank you so much for posting this! I've wondered for years if those steps still existed. I've got to go visit there now!

Awesome! Thank you so much for this. How do you find this stuff?!

Thanks for the kind comment Raquelle. As for finding the locations it varies. Sometimes while reading biographies they mention different addresses and I write them down for later. Or when I watch films I recognize certain buildings, landmarks, or if I'm really lucky I may see a street sign. With my Sunset Boulevard post I learned of some of those locations when I worked at Paramount, from some of the historical consultants - it's amazing what you can learn when talking with people.

I take this post as a sign of providence-- I am currently apartment hunting and just viewed a studio on this very street! *sigh* The power of Stan Laurel compels me ... ;)

Thank you *so* very much for all of your hard work on this truly fascinating blog!

So great. Love the intercutting. Thank you.

Oh my gosh, I LOVE you blog!

Great work! Thank you for your blogs! I just wanted to share our own day spent exploring The Music Box Steps. It's so great to live in a city where historical sets are available to experience. https://www.youtube.com/watch?v=IsjQ8YTXXPE