Whatever Happened to Baby Jane? 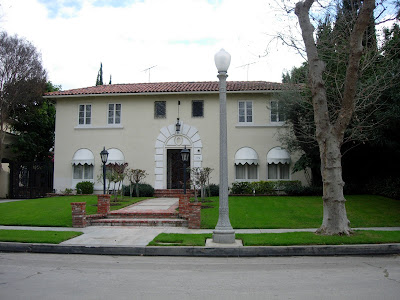 Fridays in March the Silent Movie Theatre in Los Angeles is showing gothic films about Hollywood and not surprising one of the first films they showed was the 1962 classic Whatever Happened to Baby Jane? The story is about former child star Jane Hudson (Bette Davis) and her sister Blanche (Joan Crawford), a movie star forced into retirement due to a crippling accident. Jane takes care of her crippled sister in their old Hollywood mansion but increasingly mistreats her as her mental health begins an aggressive downward spiral.

Yesterday I went around an took some photographs of a few of the locations which can be seen in the film. They are almost all in the Larchmont neighborhood of Los Angeles near Paramount Studios. The first picture up at the top is the home where the characters played by Bette Davis and Joan Crawford live. Below is a screenshot of the house as seen in the film. 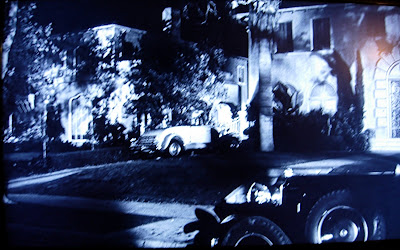 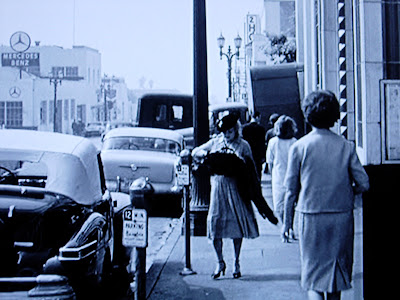 
The above screenshot is of Bette Davis going to the Citizen News building in Hollywood. It's here that Davis pays to put an ad in the paper for a songwriter. Below is a picture looking at the same location as it appears today. 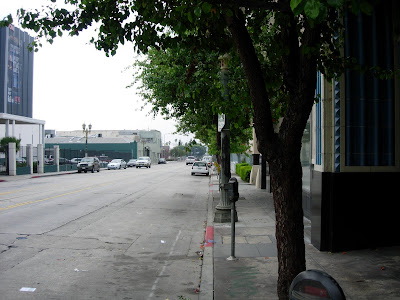 If you look closely you can see that the street lights have not changed. However, the Mercedes Benz dealer is long gone. As for the Citizen News building which was built in 1929 there is little going on here from what I can tell. The beautiful building looks to be vacant. 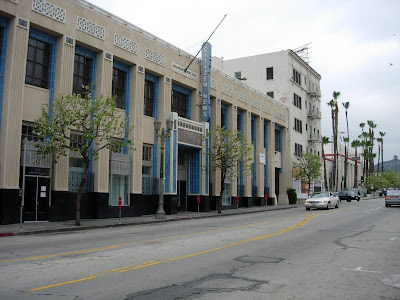 
The next screenshot below is of Davis running more errands. The location is the 200 block of Larchmont Blvd, very close to the location of the mansion. Larchmont Blvd is like the main street of this neighborhood. There are many little small shops and the area has a very quaint feel to it. Unfortunately, like many communities, this area is starting to be invaded by larger franchise businesses. 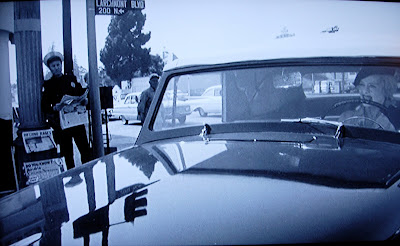 Below is the same street corner as it looks today. 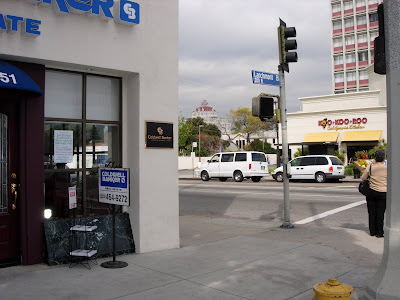 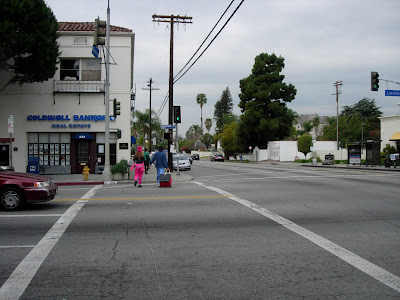 Near the end of the film when Edwin Flagg (Victor Buono) discovers what Davis has done he takes off running from the mansion. We see him running down Clinton Street to the corner of Larchmont Blvd. Below is screenshot of Flag at this intersection and a photo I took recently of the same intersection today. 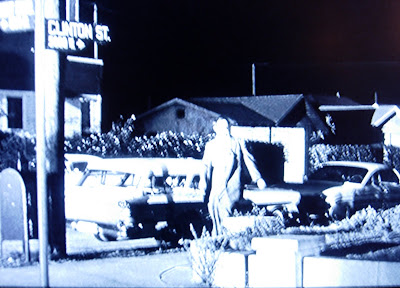 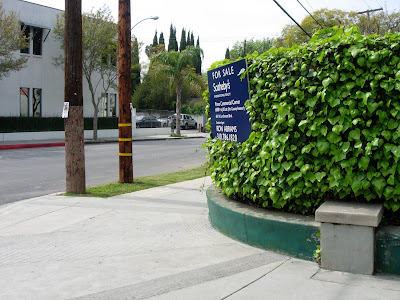 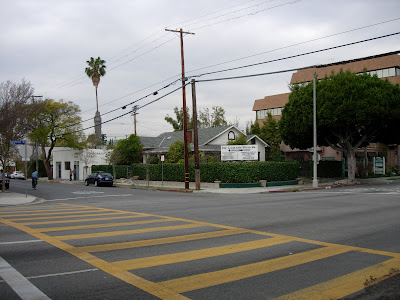 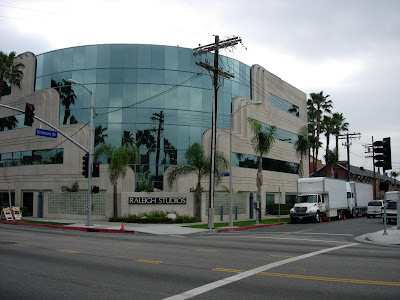 
Above is a photo of the Raleigh Studios which is located directly across the street from the more famous Paramount Studios. It was at Raleigh where the interior scenes were filmed for Whatever Happened to Baby Jane? which at the time of the film was known as Producers Studios. If you look to the right of the photo you will see some shorter buildings. It's on the other side of these buildings where we see at the beginning of the movie two Hollywood producers talking about what they're supposed to do with Baby Jane Hudson, who's disgraceful acting has made her worthless to the studio.
It's amazing that this film got made with both Bette Davis and Joan Crawford together. Apparently, there was much hostility between the two star actresses. I love some of the stories about the making of this film. My favorite is the one that during the scene where Davis is kicking Crawford that she actually did kick Crawford in the head forcing her to get stitches. In retaliation, when it came to the scene when Davis was to drag Crawford's body up the stairs, Crawford had put weights under her outfit which resulted in Davis straining her back.
Posted by Robby Cress at 5:45 PM

Thanks so much for this post, I love it, just my cup of tea seeing all those locations from the movie! Bravo.

I think your posts on Hollywood film locations are really interesting! Thank you. And Whatever Happened To Baby Jane? is a great picture, really unpleasant!

wow! great post cuite- i guess when we were walking around everywhere- i didn't really see it all for what it was- now that it's all in one single post i'm excited to say, "i was there!" :) ehhehe. great job! :)

It took me a minute to place the street where Bette is walking to place the ad- until I noticed the CNN building on the left.

I am so glad you left a comment over at Kitchen Retro so that I could find my way over here! I love seeing what places in old photos look like today, and you did a terrific job with this. I am going to be back for sure and will put you on my blogroll.

LOVE THIS SITE!
Does anyone know how I can send an
email & get in touch with Robby?
Thanks!

"What Ever Happened to Baby Jane?" One of my favorite movies. Was made the year I came into this world. I try not to visualize Betty in her last days. I understand Joan had an awesome book written of her by her daughter. "But you 'are' Blanche, you ARE in that chair"

I love this post! The movie is one of my favorites. I introduce the movie to all of my friends. It's so gothic!

I live near the "Hudson House" and get a kick out of driving by and pausing in front imagining Bette in there giving poor Joan hell.
Thanks for doing all this footwork, your blog is great!

Hi there,
I love your blog, this one most of all. I have a question. Do you know the street location of where Edwin's home was?
The same bungalows were used as Joan's apt. in Autumn Leaves as well.
Thanks, James
jamesrsfo@yahoo.com

Great post! My friend and I have done our own little "Baby Jane" out many times. Victor Buono stayed in my house during filming (I wasn't born yet, so sadly I have no stories.)

Watching the movie right now! Thank you so much for posting the then and now photos. I love it!

I’m a geek when it comes to old film locations and was watching the movie tonight on TCM and paused it when Edwin staggers to the corner and I noticed the intersection of Larchmont & Clinton and thought how cool it would be to see if that corner still looks the same today and I found Robby’s incredible
article and the then and now photos of the locations in the movie. So amazing and bittersweet to see things still standing that appeared in the actual movie. Thanks Robby for writing this and bringing a bit of old Hollywood to life again, I’m a fan now!