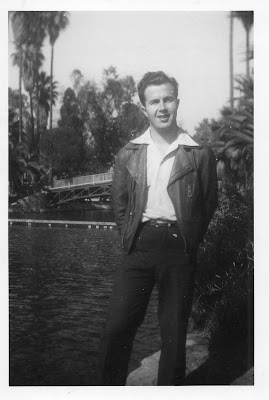 Vintage Photograph - Echo Park, Los Angeles
Another great photograph I found while antiquing in Temecula is the above picture taken in Echo Park, Los Angeles. I have no idea who the gentlemen in the picture is but he seems like a pretty stylish guy don't you think? I wonder what his story is - what he was doing in Echo Park at the time? I'm guessing by the clothing that this photo was probably taken some time in the 1950s?
Even if you've never been to Los Angeles before you've likely seen images of Echo Park in the movies. The famous silent film director Mack Sennet built his Keystone Pictures Studio here in 1912 and everyone from Charlie Chaplin, Fatty Arbuckle, and Gloria Swanson have filmed here. Likely any scenes that take place near water in those silent films were shot at Echo Park lake. But, if you haven't seen any of those early films but the lake in the picture still looks familiar it's a good chance you saw the film Chinatown starring Jack Nicholson. Remember the scene where Jack is in the little rowboat? The below picture is a little closer to how the lake looks in the film. The lake can also be seen in L.A. Confidential and True Confessions as well as other films set in Los Angeles. 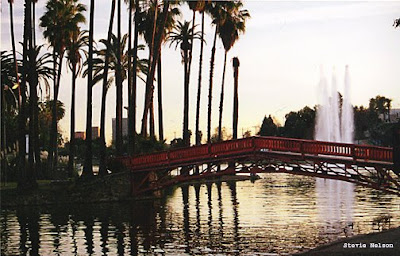 thanks for sharing! Wish I could visit.

I'm going to California in a few months, so I'll be visiting this wonderful blog often for sight-seeing ideas. This is definitely one for the books.

What a great blog! Makes me homesick for Los Angeles. I was born and raised in Eagle Rock but I moved to Brooklyn a couple of years ago. God I miss the sun:( Keep up the wonderful work, this site's fantastic!

your friend in ny
sean

Thanks Robby for the memories of Echo Park. I grew up there as a kid in the 50s. Used to go fishing in the lake, and swam at the municipal pool next door.
It's definitely old L.A. - a world of its own between downtown and Hollywood.