Rebel Without a Cause: Film Locations

Rebel Without a Cause (C) Warner Bros.

With the upcoming United States of America Independence Day celebration coming up I thought I would do a Rebel related post. The Americans rebelled against Britain and James Dean rebelled, well, just because, in the film Rebel Without a Cause. Ok, bad comparison, but I thought I would work it in somehow. Here in today's post are some of the locations from the film Rebel Without a Cause.

James Dean outside house at 7529 Franklin Ave, Hollywood
The opening shot of the film is of James Dean laying in the middle of the street outside a house. That home is located at 7529 Franklin Avenue in Hollywood. The location is near the main stretch of Hollywood Boulevard where many tourist attractions are located and would be very easy to visit if you have a vehicle. Below is a picture of how the home appears today. 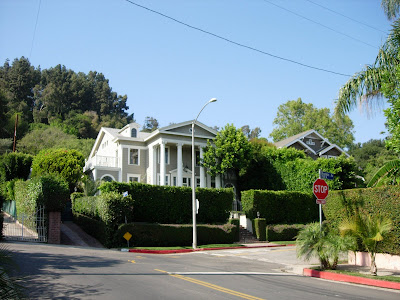 James Dean being dragged into Police Station.
Above is a screenshot of James Dean being dragged into the Police Station. The exterior of the police station was actually a facade located at the Warner Bros. Studios backlot. Below is a photo I took showing the same facade as it appears today. This facade is located on the Midwestern Street and can be seen if you take the Warner Bros. Studio tour. 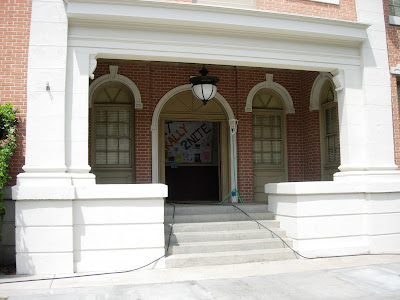 Police Station facade located at Warner Bros. backlot.
Here is another photo of the same facade. If you look closely you can see that they are dressing this building as "Eastwick High School" for the upcoming TV series Eastwick. 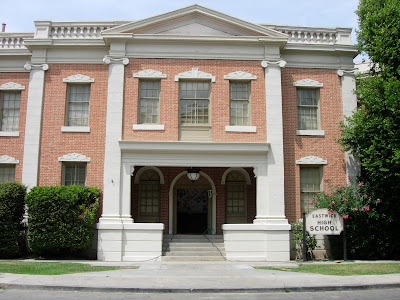 Another view of the Police Station facade at Warner Bros. 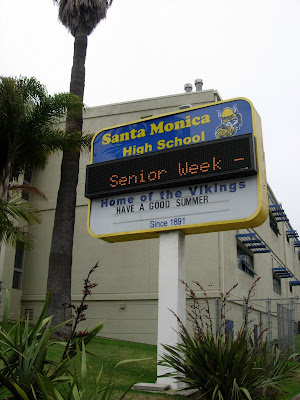 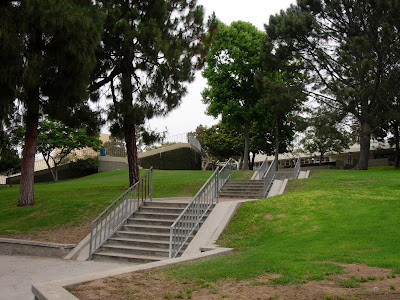 Griffith Observatory as seen in Rebel Without a Cause 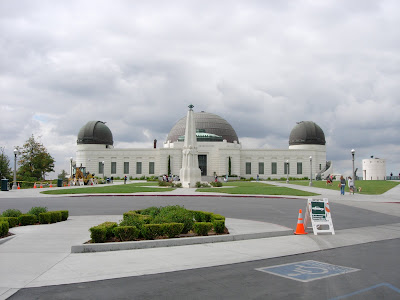 Inside the Griffith Observatory entrance as seen in the film. 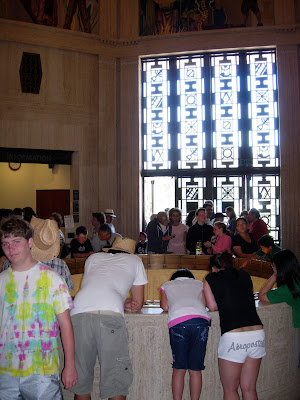 Griffith Observatory, Rebel Without a Cause fight scene 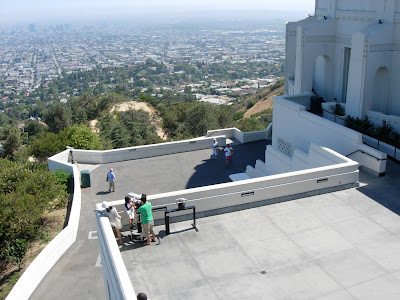 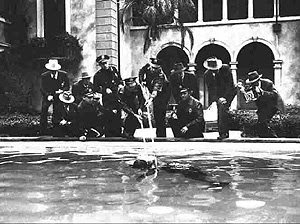 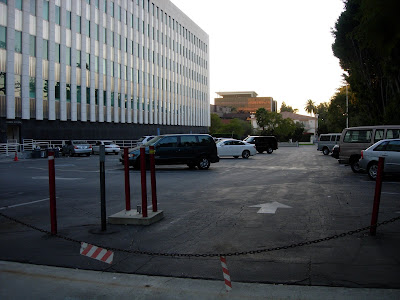 The mansion was torn down shortly after the filming of Rebel Without a Cause. Above is photo of the location as it appears today.

You're thoughts?
Posted by Robby Cress at 7:28 PM

Wow, this was really interesting!

Although, I was quite depressed to find out that they tore down the mansion...

Smashing posting, as ever!

Thanks DKoren. I'm sure your dad has many great stories from working at the Griffith Observatory. You definitely need to go see Rebel for sure!

AAAH THANK YOU THANK YOU THANK YOU!! I've been trying to find Rebel locations for what seems like an eternity, so thanks so much for posting this! And that mansion was fabulous, it's too bad it got torn down for a parking lot (which is so reasonable, right? ha, sarcasm)

I never knew the same pool was used in Sunset and Rebel! Norma Desmond should have picked James Dean. Thank you.

There's one filming location for Rebel that I found recently that I haven't seen mentioned before. It's the alley between Jim and Judy's houses, where they first met and where a few other scenes took place.

You can see it in Google maps by entering "6126 S Citrus Ave, Los Angeles, CA" and looking at the Street View.

Here's an overlay map I put together showing the exact location and outline of the mansion from Sunset Blvd.:

This is an article I found about the 'phantom house' from the LA Times:

Thank you Saleem! I have been obsessing over this house for months now, even having dreams about it.

The overlay map is A-MAZING and it is good to know that the rest of the block looks pretty much the same as it did in the house's heyday.

Hi there. I'm super amazed by a recent discover : article from the Los angele times ( 24 feb. 1957 title " Wilshire Phantom House soon to be only memory " ) with a sad but interesting image of the SUNSET - REBEL house ( former william Jenkins Residence - being demolished in 1957. Please search on flickr in vokoban's albums. It's great treasure hunt !!!! cheers, guido, italy

caroline ! look for the article posted below ! there is a super image of the house half demolished in 1957 but you can still recognize it so well ! "wilshire phantom house soon to be only memory " Los Angeles Times Feb 24 - 1957 - enjoy it !

Hello! I found this post and, by extension, your blog after I watched 'Rebel' for the first time the other day (I was quite ashamed of myself for having waited this long). I was positive that the mansion was the same one in Sunset Boulevard, but I still wanted to confirm that before I made that statement in my blog post about the film. I just wanted to tell you that I love your site and the wealth of information you provide. I linked to this post in mine and will be doing so in future movie posts.
http://thevintageproject.blogspot.com/2013/02/the-cinematic-experience-02102013.html
Thank you again for your amazing blog!

Does anyone know what scenes were filmed in Silver Springs Florida?

Great job. Love Hollywood history.
Grew up in Burbank, Ca.
Remember the Observatory , back in the fifties , on summer day trips and stuff.
Recently visited the Observatory over Christmas.
The whole place has a 'feel' to it.

Thank you for sharing this great movie history on a film that is so much part of Los Angeles history.

It's been a few years since I last saw Rebel (I saw the original release and it made a huge impact on my young teen life). But I think the scene on the steps leading up to what was the main building at Santa Monica High School revolved around Dean's character stepping on the brass school seal that's embedded in one of the steps. In my sophomore year at SAMOHI I also stepped on the seal, inadvertently and was made to take a rag and polish to polish the seal for my transgression. in my Junior year I was appointed by the vice-principle, Porter I. Leach, to be the Boys League Commissioner of the Seal and did the same thing to new students. It was part of a tradition that, after a semester as Commissioner of the Seal, I found somewhat frivolous, particularly after one kid maybe a year younger that I was broke down in tears and was shaking so hard that I helped him up, accompanied him to his classroom and refused to do my duty. The vice-principal never forgave me and that was the start of a rather rocky road for our relationship but an enlightening introduction to the politics of power. It wasn't until years later when I watched RWAC again that I realized that that scene and I had something common.

Fascinating after all these years! Longtime "Rebel" fan. Never knew of the statue at the observatory. Thanks for sharing these locations.